Healthcare:  Health care in Botswana is very different than America.  (Although I admit I don’t know what is going on with National Health Care in the USA now).

In Botswana health care is free for everyone, which is exceptionally important in a country where 25 to 35 per cent of the population has infectious and potentially fatal diseases, namely HIV-AIDS.  HIV can be treated over the course of a lifetime, but only with regular access to healthcare.  If one has HIV/AIDS they are also significantly more prone to get pneumonia, TB, skin rashes, and a host of other health problems over the course of their lives, which also requires regular access to healthcare for treatment.

There are major hospitals in all the “big” villages or towns (about 8) and fewer private hospitals.  The leaders of the country have gone to considerable expense building health clinics or health posts in nearly every village with more than a 1000 people. Mobile health stations are also available in smaller villages.  All of these health clinics and posts have nurses and most have a doctor on a somewhat regular, although not always often basis, as well.  It is a considerable accomplishment and testament regarding the Government’s commitment to the people to provide this level of care for free.

Privacy:  It does not exist here.  There are laws, and administrative procedures that are supposed to protect each person’s right to privacy that are nearly identical to what we have in America.  However, as we all know, just because there is a law doesn’t mean the majority follows it.  In America many people do not follow the laws about marijuana, seat belts, insider trading, etc…

At my school and other PCV’s schools, if a teachers or administrator knows a child has HIV it is discussed widely in hushed tones, with a general idea that it is being discussed for the overall good of the child.  Even if that were true – it is completely unethical.  And – I rarely see any good come of it.

Any time any of the PCV’s gets sick the rumor mill gins up quickly, with what I speculate is 80% volunteers and 20% PC staff speaking out of turn.  In at least one case the PC doctor told me one of our friends was in the hospital.  I can’t tell you how many times our health care providers have talked to John and I about each other’s conditions or state of health.  Honestly, that is often convenient – but if I was dealing with something I didn’t want my husband or family to know about it would be an outrage.  The way it is here now, I can’t trust that anything about my health will be kept confidential.

Doctors and Nurses: Botswana opened its first medical school a couple of years ago, and it is not yet accredited.  Almost all of the doctors in the country are from other counties.

Additionally, doctors and nurses at public institutions are considered government employees.  So, overseas medical doctors are coming here for government wage jobs, which is often a better alternative than the war or civil turmoil they deal with in their own countries.  There are many doctors from Cuba – who don’t deal with war or civil unrest, but do probably earn better wages here.

I have come to realize that the majority of Americans (or a least the majority of American’s in my circle of life) think of life almost entirely in terms of money, and that may not be the best way to measure ability, achievement, and overall life success.  But, I have not yet come to fully understand other ways to measure ability.  I still think, 95% of the time, the person getting paid the most money is likely to have the most skill (I am excluding Political and political connections).  Accordingly, in my mind, these overseas, government wage paid doctors and nurses are likely to be middle of the road doctors and not the very best doctors.

Costs:  If or when a person wants to use private health care, the costs must be paid up front.  The PC almost always sends us to private doctors and I believe the costs are very low.  A CAT scan costs about $100.  Teeth cleaning and check-up is $60.  A visit to a specialist about $30.  Medication is reasonably priced, although you can never get name brands and when I look up the medications on the Internet, they are often obscure and on occasion it is stated that the medication is no longer used.

The Wait:  If you use the free medical care, the lines are exceptionally long and one will often have to come back the next day, but you get to move to the front of the queue (line) if you were there the day before.  If you have the money to get private health care you can usually make an appointment and even get tests and results back in one day.  That in itself makes the expense worth it if you have the funds.  But private health care providers are sticklers and make each person pay up-front before any visit or procedures can take place.

Record Keeping:  Another weird thing.  People are expected to keep all their health records with them at all times and bring the records to any and all appointments and doctors’ visits.  I think this happens for a couple of reasons.  It is rare to see record keeping systems here and the lack of internet or any inter connectivity precludes centralized data.   On occasion, you can find things organized very well, but that is because the person doing the record keeping at that time is responsible.  There are no systems.

Level of Care:  These medical providers also move around often as new ones are assigned to the most rural of rural areas and everyone is constantly trying to transfer to a better place.  So, doctors and nurses constantly change making it less likely to get consistent good care.

I also sense that day to day health care does not exceed a level of care I would expect for a GP in a small town about 50 years ago.  While I am sure the PC would say I was overstating this, the Organization regularly sends us to South Africa for what many of us would consider routine procedures or reviews.  There are some issues that come up within our small group of PCV’s including wrong diagnosis, too long to get to diagnosis and poor treatment options.   That being said, most of us have a fair amount of confidence in the PC medical team – by Botswana standards.

I often feel like the best thing to do is avoid medical treatment unless it is simple or absolutely necessary.  Anything that seems like it can be put off until I return to the States should be put off.

I read in Yahoo News Scarlett Johansson is a celebrity mouth breather. It have learned it is one of several things we have in common.

I was relieved of asthma when I arrived in Africa.  It was a moment of nose breathing joy.  However, I got a new allergy that affects my sinuses and breathing. It’s probably dust.  There is more dust in the air than on the ground and many people seems to have respiratory problems.  I seem to be destine to struggle for breath my entire life in one form or another.  I must admit I am now and probably always will be a mouth breather.

To me, sinus problems fall under the “minor health issue” category.  I have asked for and received a great deal of medication from our medical office to treat this problem with almost no results.  I have asked for Afrin and Sudafed from the USA – which always worked like magic there.  While the Afrin works, it is not supposed to be used with the steroid I have been prescribed – so I don’t use it.  The Sudafed is completely useless here.

While I couldn’t fix the problem, I felt lucky that it was a respiratory problem since I was used to breathing difficulties.

However, John, was not used to any such problems.  Not only was he concerned for my health, he did not like his sleep being interrupted by my inability to breath and starts and stops through the night.

Eventually, John couldn’t take hearing the struggle to breathe though out the night any longer and he called the medical office and gave a much more detailed and freighting description of my problem than I ever did.

I decided to go to the suggested Ear Nose and Throat specialist because it does get tiring to work so hard to breathe, the massive amount of tissues per day was gross and I felt sorry for John.

I took the 1.5 hours bus ride to the doctor.  He took a look and declared it “very bad”.  He sucked congestion out, asked a few questions and said it was probably dust allergies.  He gave me an injection in each nostril.  He asked if the Peace Corps would pay for a CAT scan.  They would.

I went down the hall, had the scan and was told to come back three hours later.

Findings:  The doctor confirmed that the CAT scan results indeed indicated the situation was “bad”.

Treatment: In addition to the two injections in my nose, I was given antibiotics, steroid nasal spray, and an antihistamine.

Future:  I have been on medication for about two weeks – and I am glad to report I can breathe through my nose about half the time!  I will go back to the capital next week to see if this appears to be permanent or not. 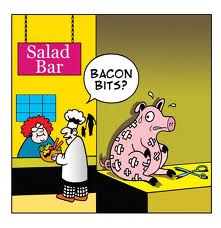 I know this doesn’t really have to do with healthcare – but it is too funny! Poor Piggy!

We are extra vigilant and diligent in avoiding accidents and exposing ourselves to sickness of any kind.  We have been very lucky so far to not have had any serious accidents or illnesses and we will continue to maintain that the best thing to do is just to never get sick.