Before I post anything about Botswana law and culture in regards to corporal punishment I want to cover a few things I remember about the issue in America.

America:  When I was in grade school ( 30 years ago) teachers were allowed to give children swats with a wooden paddles.   Many of us were afraid to tell our parents we got “swats” because our parents would proceed to spank us for being bad in school.  Teachers could also make children put gum on their noses, stand in the corner, and hit other children back when hit first.

When my parents were both in Catholic schools the nuns meted out punishments that would clearly classify as abuse today.  The nuns that didn’t physically abuse the children were very comfortable humiliating or embarrassing any child they believed was behaving poorly.  This is well documented and often referred to or discussed in fond ways today (Example:  Late Night Catechism has been a running play in Chicago for at least 20 years). 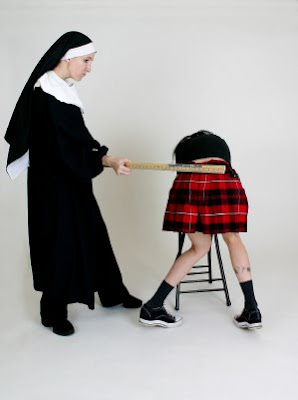 When my grandparents attended school (2 of the 4 only got to go to 8th grade), children were beaten, humiliated, kicked out and treated with every sort of disrespect that can be reined on children.

These days, in Illinois, if a teacher so much as lays a hand, even in an affectionate way, as in to hug or stoke a child, they could be in trouble.  If a teacher laid a finger on a child to physically hurt or restrain the child, the teacher would be facing termination and criminal charges.  Teachers also get in trouble for humiliating or embarrassing a child.  However, I did find several maps like the one below that indicate some form a corporal punishment is still legal in about 20 states.  Many states allow for it with parental permission, which I believe is rarely provided these days.

I only mention this to show that social change often takes 25-75 years and comes in bits and spurts.  I have said many times Botswana is a young country and many of their ways remind me of life in America 50 years ago – and in many ways so do the rules and issues that deal with corporal punishment. 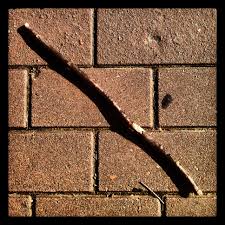 This is the standard type of stick teachers carry around to whack the kids. They cut fresh ones off a near by tree once a week.

It further states the beating stick can only be 1 metre long and 1 cm wide.  The strokes can only be applied to hand palms and the top of the buttocks.  The strokes should not be too harsh and cannot exceed the count of five.

Finally, the Act requires that each act of corporal punishment must have a witness and must be documented including the date, offense, stick size, number of strokes, students, witness, and executer’s names.

There are many reasons teachers don’t follow this law including:

-Some parents come to the school and ask the teachers to beat their children more because they cannot control their own child.

– Some students ask that corporal punishment be used because they believe that is the only way to make naughty students behave.

In addition to the reasons above people are content to have children beaten.  The biblical saying “spare the rod and spoil the child” is referred to often.  “Children should be seen and not heard”, is also quite popular.

Respect for elders is imperative to participation in the culture.  The required respect is so encompassing that there is no room to respect children.  Children exist solely to respect and wait on elders.  Children that resist this are considered very bad.

Remember that book “It Takes A Village to Raise a Child”?  I liked the ideas in the book.  In America a child’s world is usually small, and children are lucky to have two parents taking care of them, let alone a whole village.  I thought the idea of children being watched by many and exposed to many different role models, as well as being exposed to problems that over protective parents often shelter children from, was good for the child and a potential relief for over worked and over wrought parents.

Most concepts have two sides and I have seen the uglier side of this village.  Many African’s believe all adults are responsible for all children.  Therefore any adult has a right to discipline or ask for labor from any child.  Both parents and children accept this social norm.  This concept ends up allowing an awful lot of adults to beat children who are being mildly annoying, don’t move fast enough, have a smart mouth, or just don’t look right.

At Kwena Sereto (the school where I work) most teachers believe it is necessary to beat children to keep discipline.  They often tell me the beatings are a part of African culture, that American’s don’t understand. I tell them most Americas used to believe it was ok to beat children in school too – but times have changed, and they can change too.  They disregard my personal experience and act as though it must have been an anomaly.

A couple of weeks ago, one of the teachers was handing out one of her random beatings for insolence.  She was using the right size rod and the boy got three stokes.

The Justice System:  This country has two parallel systems of justice.  One is civil and mirrors the western style court system, and the other is tribal or traditional.  People can take issues to the tribal court and if both side are not satisfied they can go to the civil court which has precedence.  Most civil or domestic issues are worked out at the tribal level.

The civil penalty for inappropriately using corporal punishment is a P50 (about $6) fine or 90 days in prison.  The law was written about 35 years ago when $6 was worth about $5,000.

The tribal court method often requires people to sincerely apologize and provide financial compensation equal to damages and all is well.

Back to the beatings:  This boy went home and complained to his parents.  He said the teacher hit his testates when she beat him.  If she did, I’m sure it was an accident, as she is not one of the wild mean teachers who tries to hurt the children.  Regardless – she hit him with a stick and he was hurt in a way that made his parents decided to take him to the hospital.  Apparently his parents don’t like the village raising their child concept either.

The boys parents went to the school head and said the boy was so badly damaged that they could not name what would be appropriate compensation.  The teacher made four or five formal apologies, made several dinners for the family, paid all the hospital bills, but they kept saying it was not enough.  The family went to the police and the police asked the family to settle “this small issue”, basically ignoring their request for justice.  The police urged the family to see that the teacher was truly sorry and had done a great deal to make things right.  The family didn’t agree.  They went through the chain of command up to the actual Minister of Education.  They called all their elected officials and went to the local newspaper.

A previous event:  A similar issue [parents being furious and going to the police after their child was slapped in the face] happened at my school two years ago.  The School Head, the MoE Regional Office and the police were involved in resolving this issue.  The teacher was eventually able to placate the family.

The first time it happened the School Head sternly lectured the teachers, reminded them they were breaking the law, told them he wouldn’t protect them if the police came for them, and finally told them he thought only bad teachers had to resort to corporal punishment.  He didn’t provide for any school punishment – just told the teachers they were on their own if they caused problems.  So the beatings continued.

Back to the Beatings:  The Ministry thinks it is a big problem that this happened twice in two years at this school.  They must know it happens every days, tens of times a day, but are only bothered that parents have complained twice.

In the face of this storm including top officials at MoE, the police, tribal courts, newspapers and elected officials, the School Head has required all teachers follow the letter of the law, which means only he can beat the children.  The teachers are stoic and at this moment are worried that as soon as the students figure out that beatings are banned the children will become entirely unmanageable and all hell will break loose.

I asked the Head of Teacher Development to consider having a workshop on classroom management.  He refused saying they had long been taught that and they should remember on their own.

I am ecstatic that children cannot be beaten now.  However, I do feel sorry for teachers who are not provided tools or support to manage huge classes of children, some of which have developmental delays, some are gifted, some cannot speak English (and English is the only allowable language in secondary schools), many don’t have any parents at home, and some don’t have enough food to eat.  On top of it all, there are a handful of truly rotten kids here that will be able to cause all sorts of mayhem when all consequences for bad behavior have been eliminated.

It will be a hard go for a while – but eventually the teachers, the administrators and the MoE will  figure out how to handle this, just as most American’s have figured out how to motivate and discipline children without vehemence.  And the world will be a little better place with a little less violence happening to children in this corner!